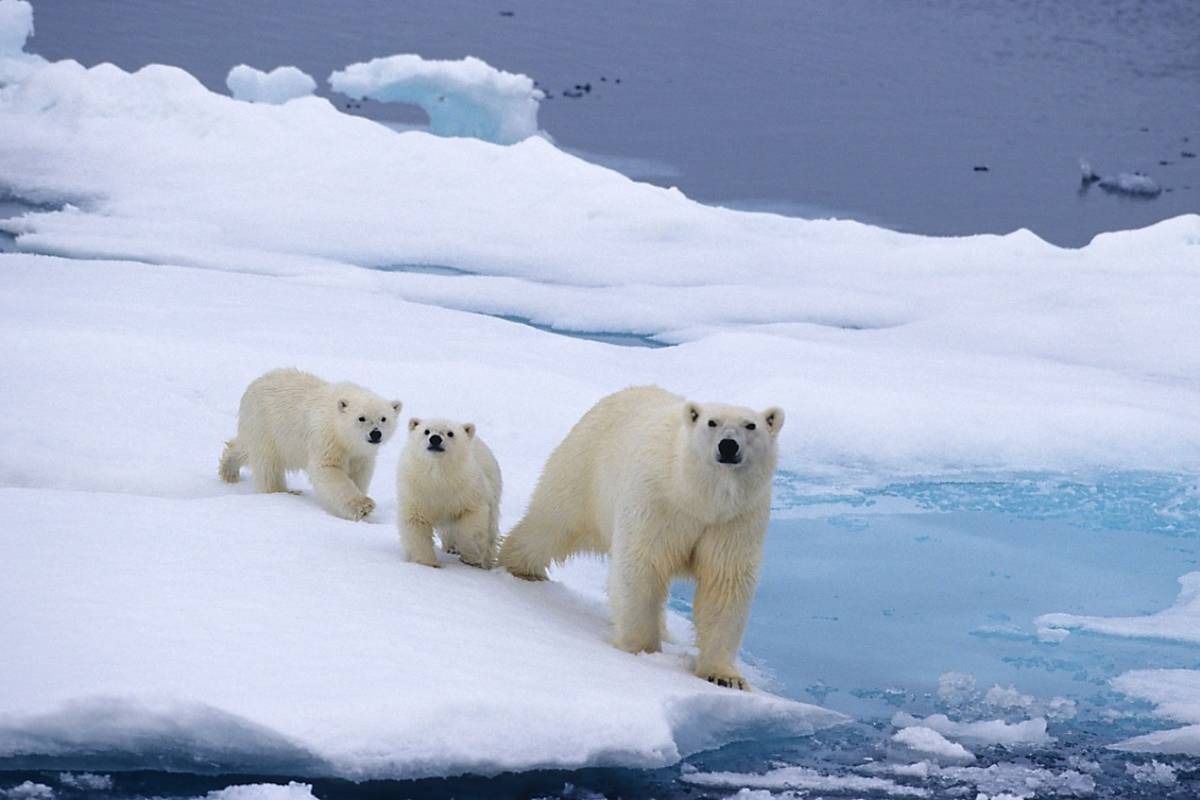 Bozeman, Montana — July 20, 2020 — Polar Bears International and a team of scientists from leading universities report that for the first time, scientists have answered the critical question of when the persistence of polar bear populations across the Arctic will be threatened due to sea ice loss from global warming. Declines in global polar bear populations have long been predicted as sea ice loss continues. Published today in Nature Climate Change, “Fasting Season Length Sets Temporal Limits for Global Polar Bear Persistence” projects when polar bear populations in the Arctic will cross thresholds of food deprivation that lead to rapid declines in reproduction and survival. The study calculates “timelines of risk” for different polar bear demographics, exploring two alternative futures with different levels of greenhouse gas emissions and atmospheric concentrations of CO2. If business-as-usual greenhouse gas emissions continue, it’s likely that all but a few polar bear populations will collapse by 2100.

“Previously, we knew that polar bears would ultimately disappear unless we halt greenhouse gas rise. But knowing when they will begin to disappear in different areas is critical for informing management and policy—and inspiring action,” said Dr. Steven Amstrup, who conceived the project and is a coauthor on the study. Amstrup is chief scientist of Polar Bears International and an adjunct professor in the University of Wyoming Department of Zoology and Physiology. “We found that moderate emissions reductions may prolong global persistence, but are not likely to prevent the extirpation of several populations, emphasizing the urgency of more ambitious emissions cuts.”

Polar bears require sea ice for capturing their seal prey. Due to declining summer sea ice, many bears are forced onto land, or they follow the remaining ice as it drifts over deep, unproductive waters. In both cases, polar bears are largely food deprived. Prolonged fasting periods have been linked to reduced body condition, reproduction, and survival in some polar bear populations. Continued sea ice loss ultimately threatens polar bear survival Arctic-wide. When lowered ice availability will reach critical limits for polar bears in different parts of their range had previously not been determined. This is because data linking sea ice decline to reproduction and survival are lacking for most of the 19 polar bear populations and cannot be measured in advance for future low ice extremes.

“In this study, we flipped the focus so that future reproduction and survival—the vital demographic parameters of interest—become model outputs rather than required but unobtainable inputs,” added Dr. Amstrup. “We now have an analytical basis for how populations will begin to collapse and how much different age and sex groups can endure.”

“By estimating how thin and how fat polar bears can be, and modeling their energy use, we were able to calculate the threshold number of days that polar bears can fast before cub and/or adult survival rates begin to decline,” said Dr. Péter Molnár, of the University of Toronto, Scarborough, who built the energetics model and is first author on the study.

“Intersecting these fasting impact thresholds with the projected future number of days that sea ice will be absent, we were able to project when fasting impact thresholds will be exceeded in different parts of the Arctic,” reported Dr. Cecilia Bitz, a climate scientist with the University of Washington, Seattle. Dr. Bitz, second author on the study, was one of the original developers of the Community Earth Systems Model, used here to project the number of future ice-free days where each polar bear population lives.

The model’s outcomes are consistent with previous projections that polar bears are likely to persist to 2100 only in a few High Arctic populations if we don’t stop human-caused warming. By focusing on the biological mechanisms determining how prolonged fasting impacts reproduction and survival, we can now provide detailed timelines for when and how different populations will be affected. The reliability of the paper’s projections is affirmed by noting that the models’ projections captured demographic changes in populations where climate change impacts are already evident.

“My colleagues’ approach to modeling the trajectory of the various sub-populations of polar bears represents an innovative solution to uncertainties resulting from previous work. They used first principles of physiology to estimate the ability of polar bears to withstand extended periods of fasting. This is an important tool for our continued conservation efforts of this species,” said University of Wyoming professor, Merav Ben-David, who has been studying polar bears with Dr. Amstrup for 20 years but was not involved in the current project.

“Polar bears have long been considered messengers of the climate change symptoms that will impact all life, including humans.  We know that floods, droughts, and wildfires will become more frequent and severe as the world continues to warm, but timelines for such events are hard to predict.   The coronavirus pandemic is a reminder of how vital it is for our governments to take the actions needed, even when the timeline of the threat feels uncertain. Showing how imminent the threat is for different polar bear populations is another reminder that we must act now to head off the worst of future problems faced by us all,” said Dr. Amstrup.

With business-as-usual greenhouse gas emissions, steeply declining reproduction and survival will jeopardize persistence of all but a few high Arctic subpopulations by 2100. Moderate emissions prolong persistence, but is unlikely to prevent some population extirpations within this century.

Ideally we would follow a different scenario, not modeled here, where people come together and take swift, bold action as a global community—to meet the goals set to during the Paris Agreement, and keep global temperature rise below 2 degrees. This is still an option, there is still time to act. Doing so, could preserve polar bears over much of their current range indefinitely.

Polar Bears International’s mission is to conserve polar bears and the sea ice they depend on. Through media, science, and advocacy, we work to inspire people to care about the Arctic, the threats to its future, and the connection between this remote region and our global climate. PBI is the only nonprofit organization dedicated solely to wild polar bears and Arctic sea ice, and our staff includes scientists who study wild polar bears. The organization is a recognized leader in polar bear conservation. For more information, visit www.polarbearsinternational.org 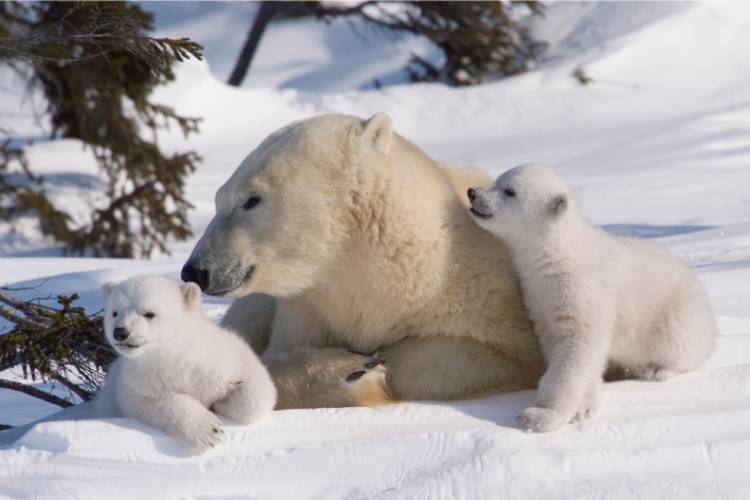 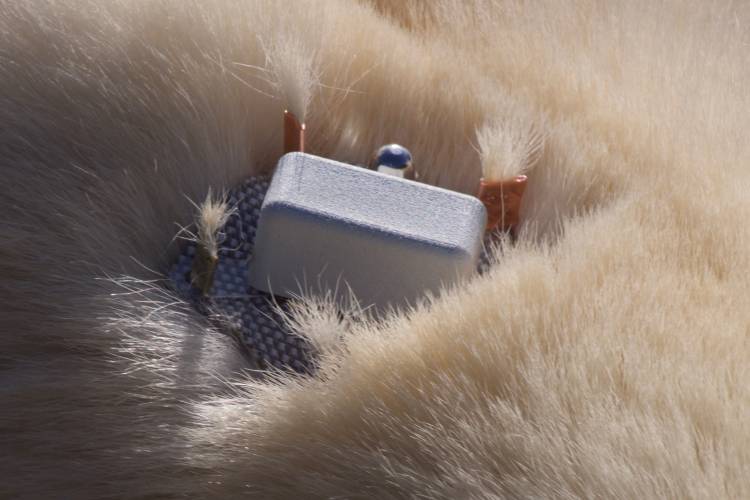 A new Polar Bear Research Council Masterplan provides a roadmap to the most critical studies needed for polar bear conservation and how polar bears in zoos can help fill knowledge gaps that benefit their wild peers. 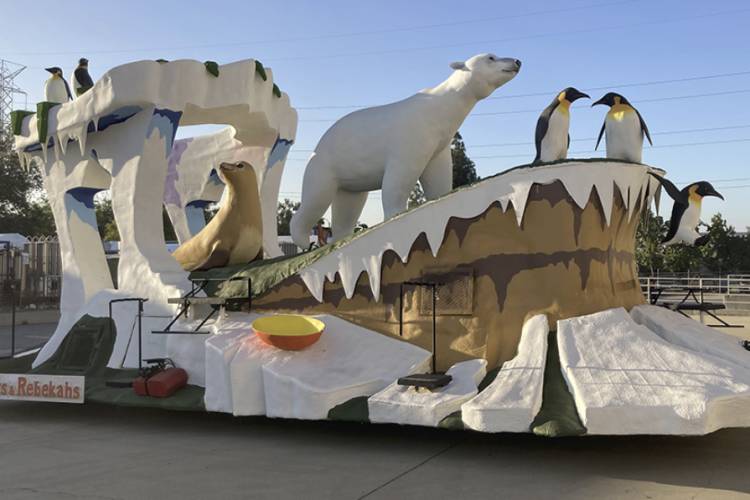