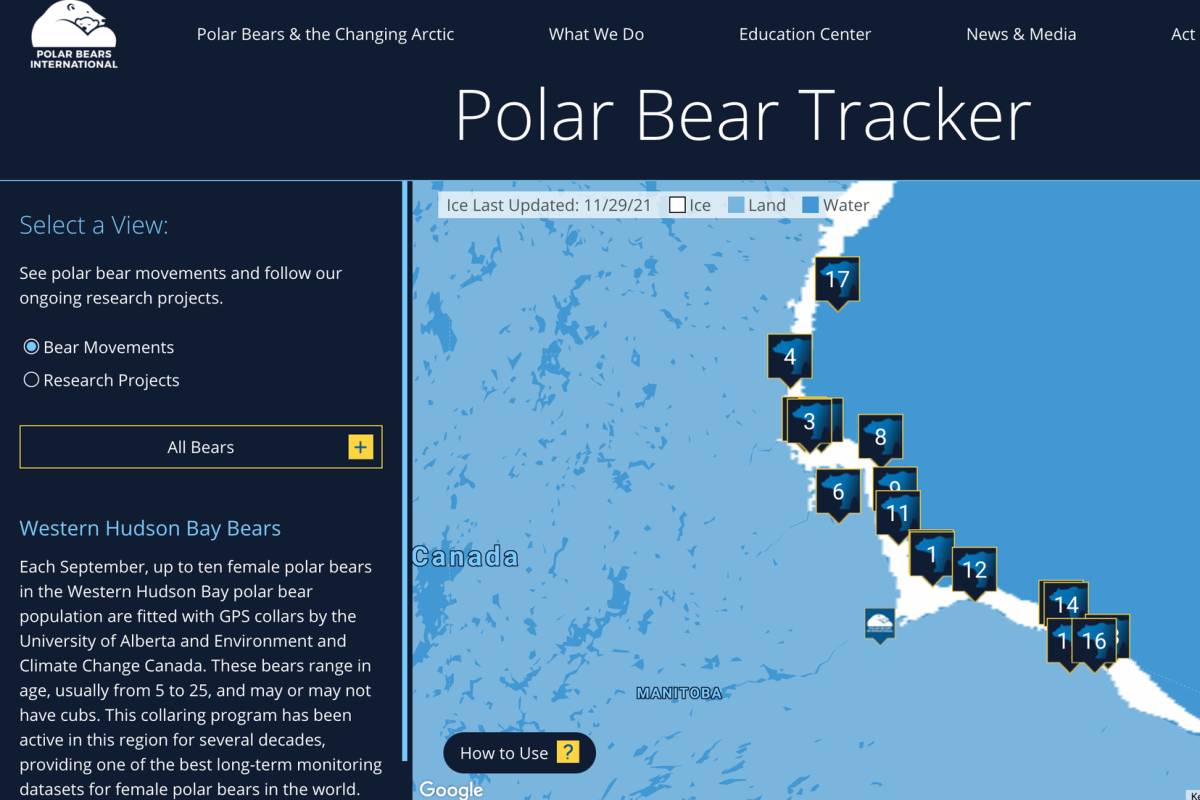 Each year the Polar Bears International Bear Tracker follows GPS-collared female polar bears from the Hudson Bay region, allowing us a glimpse into the secret world of polar bears on sea ice. This year, we are thrilled to be tracking more bears than ever and to have the chance to compare data from the Western and Southern Hudson Bay populations for the first time. We look forward to the months ahead, watching the different decisions these bears make before they return to land next summer. There is so much still to learn about them.

Hudson Bay experienced a late freeze-up this fall. Polar bears tend to wait until ice concentration is greater than 10% for several days before they head out to hunt seals. This year, that did not happen until the first week of December, approximately 2-3 weeks later than the average freeze-up date for Hudson Bay.

Usually, this region begins freezing up by early November; by the end of the month, the northern part of Hudson Bay is typically completely iced over. This year, however, only the far north had frozen over by the end of November; the rest of the bay remained mostly ice-free except for a narrow band of ice along the western coastline.

We saw this reflected in movements on the Polar Bear Tracker, with bears not getting onto the ice until the very end of November and, even then, only on ice that was right offshore. Many bears did not leave land until December, and only recently have we seen large movements, when the bears were finally able to fan out and truly expand their hunting grounds. This is the second-lowest sea ice extent in Hudson Bay on record for this period, surpassed only in 2010 (National Snow and Ice Data Center).

While Hudson Bay will eventually completely freeze over through the coming winter, this delay meant that already-strained polar bears, including moms with nursing cubs and skinnier bears, were stuck on land longer. We know there is a fasting threshold of 180 days when polar bears are off the ice, away from their seal prey, after which we are likely to see starvation events. Thankfully we did not reach that threshold this year, but came close, underscoring the urgent need for action on climate change to preserve the sea ice that polar bears require.

Unfortunately, when polar bears are on land longer, they are more likely to cause trouble in communities, with potentially deadly consequences for both bears and people. People and polar bears can co-exist, but it takes empowering communities with the tools and knowledge they want and needs to effectively keep both species safer, a goal that Polar Bears International is committed to supporting.

For now, the bay continues to freeze, and polar bears are searching for blubber to fill their bellies. Happily, they have months of hunting ahead and we look forward to sharing their movements with you every step of the way!

In the meantime, consider supporting polar bear conservation in different ways this holiday season. By working on community solutions to lower carbon emissions and protect sea ice, we can work together to keep polar bears roaming the Arctic sea ice, always.

This 16-year-old female from the Western Hudson Bay population is currently on the sea ice with her two female cubs-of-the-year and is one the most southern WHB bears on the Tracker so far. Arctic Ambassador bear seems like a smart mom: she stayed slightly inland over the summer, likely avoiding male bears along the coast to protect her two little cubs. As the weather started to cool and ice started forming, she swiftly traveled northeast to the coast, getting onto the first bits of ice by the end of November. She then veered southeast, likely due to better ice conditions and a safer platform for her cubs. She is one of the heaviest females and is already shaping up to be one of the biggest travelers in this year’s cohort, clocking in at 225 kilometers. We hope her cubs are learning to hunt and look forward to seeing if she keeps racking up the distance!

This 19-year-old female is from the Southern Hudson Bay population so tends to make her home in Ontario during the summers when Hudson Bay is ice-free. However, when we started tracking Aurora 2 and her two female yearlings, she was right near the border of Manitoba and Ontario, which is relatively far north for bears in her population. This family has since moved even closer to Manitoba and is currently quite near another tracked female—the ice there must be good! Aurora 2’s last location shows her just starting to venture onto the sea ice, slightly delayed compared to the bears farther north. Ice takes longer to freeze-up the farther south you go in Hudson Bay, but it also melts here last. This means that if she stays close to her home province of Ontario, she might get extra hunting days in the spring. Hopefully, by now Aurora 2 is hunting seals with her cubs after fasting during a long summer on land. She was a healthy weight when she was collared, which hopefully means she’s a skilled seal hunter. However, it could also mean she simply doesn’t waste much energy walking. So far, she’s traveled only 68 kilometers. Not bad if the hunting is good!

Fifteen-year-old Daphne and her boy and girl cubs-of-the-year have been especially interesting to watch. This fall they started their travels north of Churchill, Manitoba. In mid-November, they curiously headed west and farther inland for a few days, before soon veering back northeast toward the coast. Maybe they were avoiding something? If so, that was a smart move by Daphne because her cubs are still quite young and inexperienced. This family moved onto the ice in northern Manitoba in early December, then immediately veered southeast into Hudson Bay. Daphne seems decisive. She is currently off the coast near southern Wapusk National Park. One thing is for sure, this family does not mind traveling and has already walked 303 kilometers—more than most bears on the Tracker!

This 14-year-old Western Hudson Bay female is a true Churchill bear! When we first started tracking Floe and her yearling female, they were up the Churchill River, slowly making their way toward Hudson Bay. They seemed to take their time until the ice started freezing in late November, at which point they picked up their pace. Between November 25th and 30th, Floe and cub bypassed Churchill (making sure to avoid people and Polar Bear Alert team) and got out on some of the earliest ice to freeze. As of early December, they were heading slightly northwest, possibly to try hunting up the coast, but soon veered northeast out into the bay. This family has absolutely started their winter journey and are currently clocking in at 167 kilometers with no signs of slowing down.

Twelve-year-old Portia and her yearling female cub are some of the biggest travelers on the Tracker right now, already covering 241 kilometers. After spending their summer slightly inland in southern Wapusk National Park in Manitoba, Portia started heading north in late November as temperatures were cooling. Within less than two weeks, Portia had already walked to the northern part of Wapusk National Park, getting onto the first bits of sea ice by early December before travelling north of the Town of Churchill. Soon after, this small family headed northeast into Hudson Bay and relatively far out on the sea ice, especially considering the slow freeze-up this year. No doubt Portia’s yearling female is picking up as many hunting tricks as possible from mom. In 2022, she will be weaned in the spring and will head out on her own. We’ll be watching where they move in the meantime and wish them happy hunting.